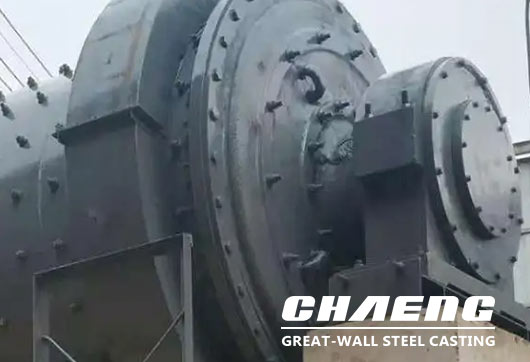 The mineral dressing ball mill is important industrial grinding equipment. In order to improve production efficiency, ball mill enterprises often work continuously for 24 hours. During the operation of the mineral dressing ball mill, the ball mill trunnion is sometimes worn. Sometimes, in order to catch up with production tasks, there is not enough downtime for repairing. In this case, the following emergency methods can be used to repair.

In the absence of sufficient repair time, the repair can be carried out by welding repairs with longitudinal ribs and circumferential reinforcement plates at the worn places. When welding the longitudinal rib plate and the circumferential reinforcement plate, avoid the contact angle between the ball mill trunnion and the bearing pad to prevent the trunnion from rising too high to melt the pad. Turn on the lubricating pump during welding, and then apply it to weld when the surface temperature of the welding object is controlled below 100 °C. When the rib plate and the reinforcement plate are initially welded, drill holes at the end of the crack to eliminate the stress to prevent the crack from expanding. Use a magnifying glass to check whether there is a crack in the weld after each welding, and tap the weld with a small sharp hammer to eliminate welding slag and welding stress to prevent cracks. Choose the J507 electrode, dry for 2h before use, and dry at 150-200℃. Finally, grind the worn part so that the surface is 2mm lower than the entire trunnion surface, so as to avoid the continued wear of the repaired surface in the subsequent operation of the equipment. Taking the following emergency measures can repair the wear of the ball mill trunnion in the shortest time and ensure the smooth completion of the production task.

Pre: Requirements for the use of slag ladles in steelmaking plants